…Because it offers so much more for our customers than other local airports.

Call it the quiet suburban neighborhood airport that lies close to all the action…by land and by air!

By land, we are just minutes away. Located in the heart of Boston’s North Shore, Beverly Municipal Airport sits away from the hustle and bustle of the city. Yet a mere 30-minute drive north of metropolitan Boston, the airport is a very reasonable option for those who live in the Greater Boston Area. Major shopping centers and restaurants are minutes away. And all the while the accessibility could not be easier: only 4 minutes off of a major highway.

The View…
Our backyard is unarguably a feast for one’s eyes.

Shortly after liftoff it all becomes visible: the breathtaking Boston skyline, the picturesque New England coastline, the Presidential Range crowned by Mount Washington to the north, the arm of Cape Cod to the south, vivid foliage in the fall, snow-blanketed farmlands in the winter… Sit back and enjoy the view.

The Serenity…
Relax. Learn. Save.

Although Beverly Municipal Airport lies under the busy airspace of Boston’s Logan International Airport, the surrounding skies are quiet and serene. And while the airport sees its share of training aircraft and business jets alike, the overall air traffic load is relatively low. Waiting in long lines behind other aircraft for a takeoff clearance is non-existent. Likewise, there is never waiting your turn in a long sequence of aircraft for permission to land. This translates directly into more useful training time with less money spent per flying session. And most importantly of all: Beverly Municipal Airport is extremely student pilot friendly.

The Diversity…
It is said that if you can fly here, you can fly anywhere. They who say it are correct.

Training at Beverly Municipal Airport will expose both student and licensed pilots alike to one of the most diverse environments imaginable. Airspace? Immediately surrounding the airport one will find simple airspace with quiet, wide-open skies, yet the complex and congested airspace of Boston’s Logan International Airport loom just to the south. Topography? Sea level flatlands surround the airport, yet the challenges of mountain flying lie to the north with over-water flying to the immediate south and east. Air Traffic? On any given day one can witness operating into and out of the airport everything from ultralights to blimps to helicopters to business jets…all coexisting in harmony. Air Traffic Control? With a part-time control tower, pilots learn the art of working both with and without ATC.

The Community…
Be surrounded by those who share your passion for aviation.

Beverly Municipal Airport is home to a very tight-knit airport community where everybody seems to know one another. The North Shore Community College Aviation Science Undergraduate program is based at the airport, with many of the classes as well as all flight training held on the grounds. There is an FAA Designated Pilot Examiner who conducts licensing exams located right on the airport. A complete aircraft maintenance facility serves the airport. Local aircraft owners call the airport their home base. And of course the local “airport bums” can still be seen gathering on nice flying days…regaling themselves with tales of the flying days of yesteryear and engaging in the timeless act of hangar flying. All of this makes for a colorful learning environment infused with people of experience and character.

Snow? With a fleet of heavy snow removal equipment, Beverly Municipal Airport is open for operation every day of the year. Dark? All runways and taxiways are served by lighting, so flight operations are possible 24 hours a day. Weather? Three instrument approach procedures allow departure and arrival to the airport on days when dreary weather brings low clouds and low visibility. The result?: uninterrupted training provided year-round. 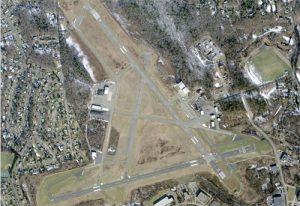